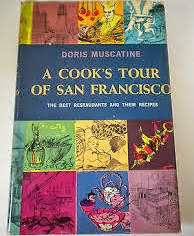 Season fully trimmed steak filets with salt and pepper.  Wrap a slice of bacon around the outer edge, and secure with a toothpick.  Broil according to taste.

Remove to a hot platter, placing it first on the crouton or toast.  Top with a slice of pate and a few slivers of truffle. Pour very hot Marchand de Vin sauce over all.

Spread the bones in a roasting pan, sprinkle with 2 tablespoons flour, and cover with carrot and onion slices. Bake in a hot oven (400 degrees) for at least 1/2 hour, or until the bones take on a good brown color.  Remove them to a large kettle, and add 1 stalk of celery in large pieces, oregano, parsley, salt, pepper and 1 quart of water.

Remove at from roasting pan, deglaze with a small amount of water, and add to kettle.  Boil the stock gently for 3 hours or more. During cooking, skim off any scum that gathers, Strain.

Melt the butter in the skillet, and add remaining flour, blending well, and cook until brown, but avoid burning it.  Add 1 cup of Burgundy wine, a little at a time.  Cook until smooth. Strain and add to stock.

(Origin - "A Cook's Tour of San Francisco - The Best Restaurants and Their Recipes" by Doris Muscatine, 1963. Recipe by The Red Knight, a small, continental cuisine restaurant that opened on Sacramento Street in 1959. The head chef was Swiss chef Ernest Lanker, formerly head chef for 9 years at Trader Vic's.)