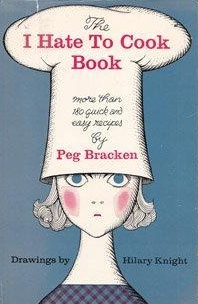 "This is a famous recipe, I believe, but I haven't the faintest idea who invented it. I saw it in a newspaper years ago, meant to clip it, didn't, and finally bumped into the cake itself in the apartment of a friend of mine.

Put your sifted flour back in the sifter, add to it cocoa, baking soda, sugar, and salt,  and sift this right into a greased cake pan, about 9-x-9-x-2 inches. Now you make three grooves, or holes, in this dry mixture.

Good Old Confectioner's Sugar Frosting
Sift two cups of confectioner's sugar with a dash of salt. Then add a teaspoon of vanilla and beat in enough cream to make it the right consistency to spread.


(Origin - "The I Hate to Cook Book" by Peg Bracken, 1960. NOTE - Author Peg Bracken was a comedy and advertising writer who wrote this best-seller "for everyone, men and women alike, who wants to get from cooking hour to cocktail hour in as little time as possible."  This hilarious, yet excellent, cookbook sold more 3 million copies in the 1960s.)

Posted by Deborah White at 2:41 PM