Fricasseed Chicken with Dumplings in Gravy (1927) 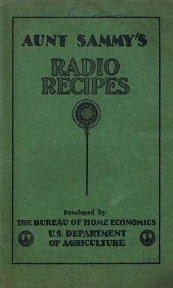 "Dress the fowl and cut it into pieces for serving. Roll each piece in flour and brown in hot fat. Browning the chicken before cooking help retain and develop the flavor. After the pieces are browned, simmer until tender in enough water to cover.

"When it is done, take the chicken out and cook dumplings in the gravy. Serve the chicken in the center of a platter, with the dumplings around the edge. Pour gravy over the chicken."

Dumplings
"Sift the flour, baking powder, and salt together. Beat the egg well, add the milk, and mix with the dry ingredients. Drop by small spoonfuls in the chicken gravy. Cover tightly and cook for 15 minutes.

(Origin - "Aunt Sammy's Radio Recipes" by The Bureau of Home Economics, U.S. Department of Agriculture. Published in 1927. Aunt Sammy was a fictional radio character created by the Bureau of Home Economics of the U.S. Department of Agriculture, for a popular cooking show called Housekeeper's Chat. Its target audience was farm wives. The show aired from 1926 to 1944.)