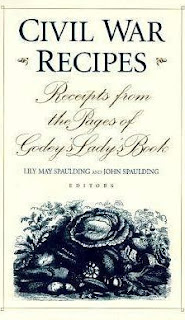 "Two cups of molasses, one cup of butter, one cup sugar, one cup sour cream, one teaspoonful cloves, one of saleratus, two teacups currants.

"Butter melted with molasses and pour in three or four cups of flour; then add sugar, cloves, and half the sour cream. Put in the rest of the cream when you have dissolved the saleratus in it.  Then take enough more flour to make it about as thick as tea cakes.

(Author's note - "This cake my have been named for President William Henry Harrison... During his presidential campaign, a large rally in Ohio featured such food as corn dodgers, hard cider, and barbecued ham.")

(Note - "Saleratus was a chalk-like powder used as a chemical leavener to produce carbon dioxide gas in dough. It was a precursor to baking soda...Substitute: Per teaspoon of saleratus, 1 1/4 teaspoons of baking soda."  Source: Cooksinfo.com)

(Origin - "Civil War Recipes - Receipts from the Pages of Godey's Lady's Book" compiled and edited by Lily May Spaulding and John Spaulding.)