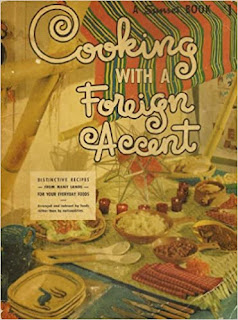 Soften yeast cake in in lukewarm water, and add to mixture. Sift flour with spices and stir into mixture to make a soft dough. Add currants to dough.  Turn dough onto a floured board, and knead until smooth and elastic. Place in a greased bowl, spread melted shortening over dough, and cover bowl with a cloth. Let rise until nearly doubled in bulk.

Turn out onto a floured board and knead down. Form into small balls about 2-inches in diameter. Brush some melted shortening over the top of each roll, cover with a cloth, and let rise until almost doubled in bulk.

Before baking. make a cross on top by snipping dough with scissors. Bake in a hot oven (400 degrees) for 15 minutes or until brown. A cross of powdered sugar icing may be added when buns have cooled enough so icing won't melt.  Makes about 4 dozen.

(Origin - "Cooking with a Foreign Accent" By Sunset books and magazine, 1952.)

Posted by Deborah White at 2:25 PM