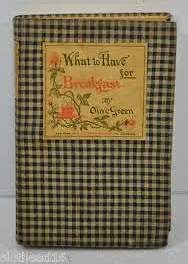 Mix the sugar, butter, flour, eggs, and milk thoroughly, the yeast having been dissolved in the milk, previously scalded and cooled.  Add cardamon. Dredge the fruit with flour and add last.

Let rise four hours, or more if necessary. When ready for baking, rub with softened butter, and sprinkle with granulated sugar, cinnamon and chopped almonds.

Bake in a tube pan or in a ring on a large baking sheet.

Other Coffee Cakes from "What to Have for Breakfast"

Posted by Deborah White at 4:38 PM