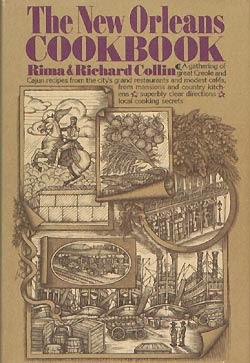 Put the bacon slices flat in a large heavy skillet. Turn the heat to low, then raise to medium after a few minutes.  When the bacon barely begins to turn brown, place the eggplant slices between the pieces of bacon, and cook slowly over low heat.

Add the onion, parsley, marjoram, pepper, and salt.  Raise the heat to high, and pour the hot water slowly into the skillet, around the sides.  (Don't pour it over the eggplant and bacon.)

Quickly cover the skillet tightly, and lower the heat to medium.  Simmer for 20 minutes, or until the onions are tender, uncovering frequently to stir.  Meanwhile, preheat the broiler.

Spoon the contents of the skillet evenly into 4 individual flameproof ramekins.  Place strips of Swiss cheese in a spoke-design on top of each ramekin.  Put the ramekins under the broiler about 4 to 5 inches from the heat.  Glaze until the cheese is melted and lightly browned, about 10 minutes.  Serves 4.

Another Recipe from "The New Orleans Cookbook"

Posted by Deborah White at 9:48 AM