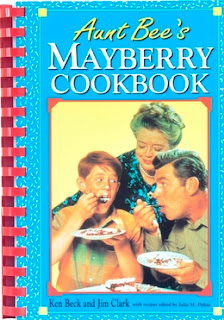 Add the flour mixture to the persimmon mixture alternately with the buttermilk mixture, stirring well after each addition.

Place butter in a 9-x-13-inch cake pan, and place in a 325 degree oven until melted. Using a pastry brush, coat the sides of the pan. Pour the excess butter into the batter. Add the cinnamon and vanilla, and mix well. Pour into the pan.

Bake in a 325 degree oven for 1 hour or until a table knife inserted in the  center comes out clean. The pudding bread will puff up and then flatten out as it cooks. Variations - Some cooks add nuts, raisins, or coconut before baking. Serves 12.

(Origin - "Aunt Bee's Mayberry Cookbook" by Ken Beck and Jim Clark. Recipes based on the 1960 to 1968 television series "The Andy Griffith Show." Cookbook published in 1991.)

Posted by Deborah White at 1:29 PM