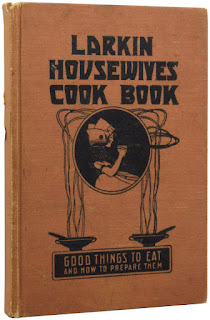 "Chop one peck green tomatoes or put them through food-chopper using coarse cutter,  drain off juice, and add as much water as there was juice.  Also add five pounds brown sugar and two pounds chopped raisins.

"Cook slowly until the tomatoes are tender, then add two tablespoons each of Larkin cloves, cinnamon, allspice, and salt, and one cup vinegar.

"Boil about five minutes, stir frequently, then add six large sour apples that have been peeled, cored, and chopped.

"When the apples are done, the mince-meat is ready for jars. Seal while hot. You will find this very delicious for pies."

Posted by Deborah White at 3:35 PM